These countries drink the most alcohol

Which countries are the drunkest? It depends on how you measure. These are the results of two surveys: one shows how often people drink, and the other shows how much alcohol is consumed per capita. Interestingly, only Germany is on both lists. Does this mean that Germans are the biggest drinkers? Look at the tables and say what you think. 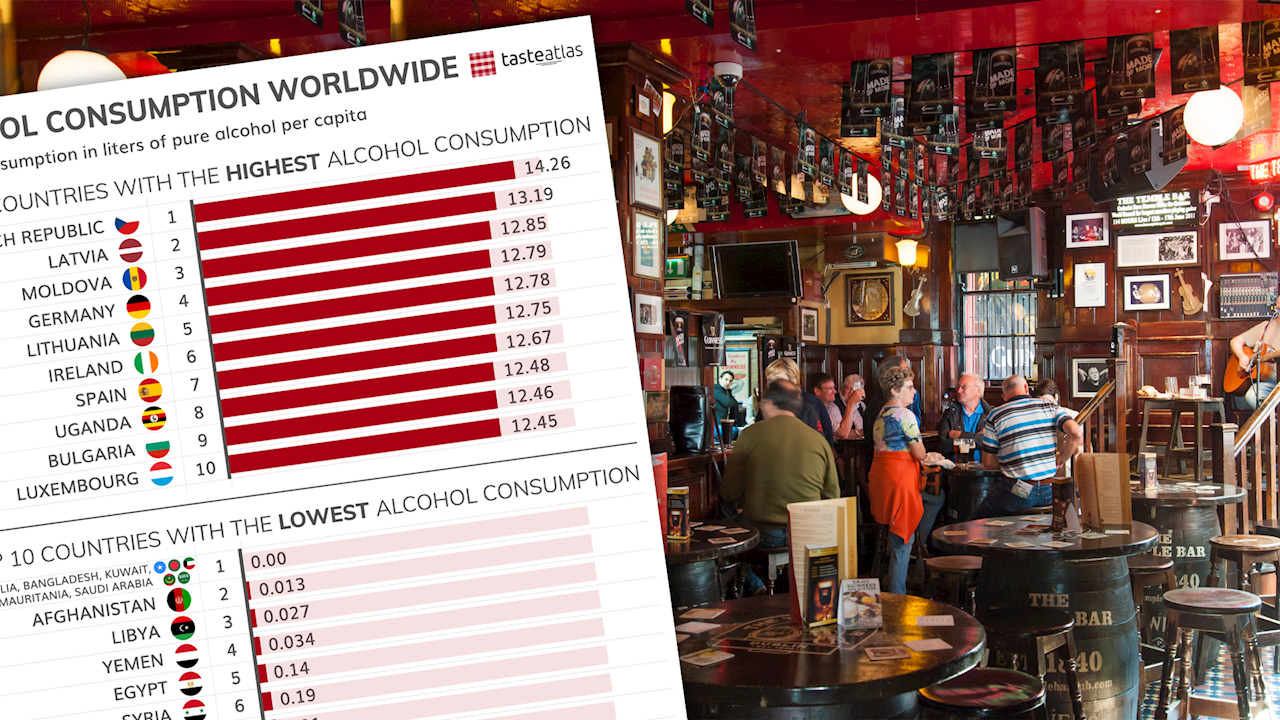 The consumption of alcoholic beverages is almost as old as human civilization itself and is integrated into the cultures of many countries. However, while alcohol may be one of the oldest and most popular recreational drugs in the world, the research shows us that usage and alcohol preferences differ between countries.

So, which are the world’s “drunkest nations” and what is their drink of choice?

The World Health Organization and the Global Drug Survey published some interesting results following their research on the global drinking demographic and the consumption of alcoholic drinks.

The results show that while some nations drink more often, others drink on fewer occasions but consume more alcohol. The lists feature usual alcohol-loving countries such as France, Czechia, and Australia, along with some surprising additions.

The results of the global drug survey: French drink alcohol the most regularly

The Global Drug Survey (GDS), the largest international drug survey that conducts online research on drug and alcohol use, reported that France is the country where people drink alcohol the most regularly.

More than 30,000 people from 22 countries participated in the latest study regarding the frequency of drinking and how many times did they get drunk. According to the results relating to the frequency of drinking that explored approximately how many days per year the participants drank alcohol, France tops the list with 132 days a year, which is well above the global average of around 101. 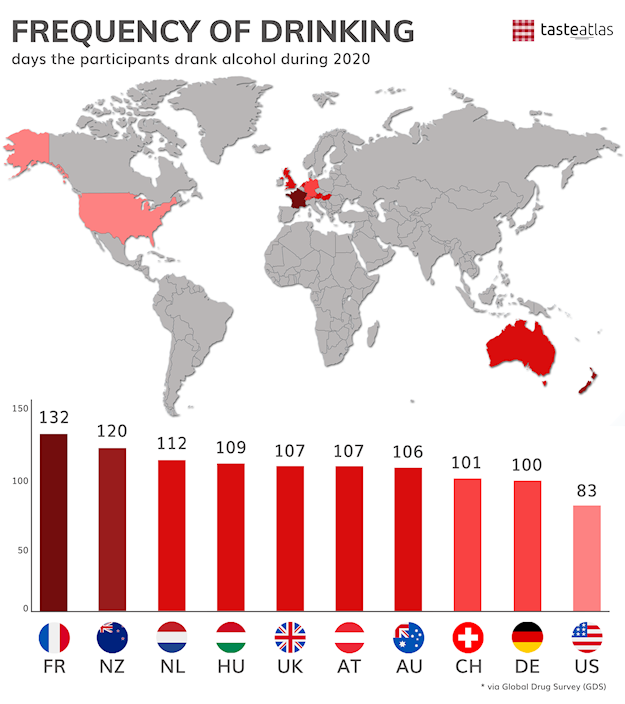 These were mainly Eastern and Central European nations, with Czechia leading the list and Latvia, Moldova, and Germany following. Uganda stands out as the only non-European country on the list.

When it comes to countries with the lowest alcohol consumption, the list is dominated by North African and Middle Eastern nations. 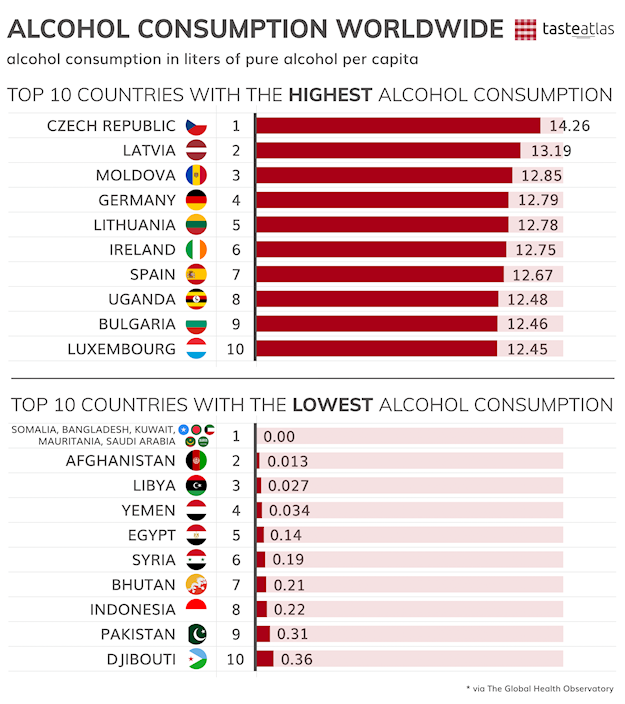 Map of the alcohol preferences around the world

Now that we have established which countries drink the most, let's see what is their alcohol of choice.

The map below shows the favorite alcoholic drinks of each nation, according to WHO. The most popular alcoholic beverage in each country is represented by a different color: red for wine, yellow for beer, and blue for spirits. 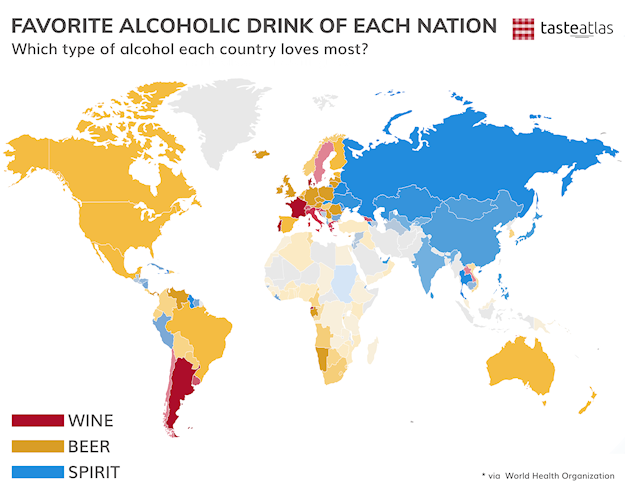 Data taken from the WHO has confirmed some of the well-established stereotypes; while France, Italy, and Portugal are, as one might think, more focused on wines, Russia continues to love its vodka, and Germany is devoted to beer. It seems reasonable to assume that most nations favor the alcohol they produce the most.

Of course, there are some exceptions. According to WHO data, it looks like Spain, which is the third-largest wine producer in the world, prefers beer over wine.

But is that really that surprising? If we take a look at the top ten countries that consume the most alcohol, we will notice that all of them drink beer more than wine. This might be related to the social activity which accompanies the beverage, where wine is usually consumed with lunch or dinner, and beer when people go out, socialize and tend to drink more. Also, we must not ignore the fact that Spain is one of the largest beer-producing countries in the EU and that domestic beer is fairly cheap.

And when it comes to Australians, more recent research than the one published by WHO in 2014 shows that Aussies love wine just a bit more than beer.

Which countries drink the most wine?

The most enthusiastic wine drinkers are some of the traditional wine-producing countries. France and Italy are high up on the list, but the number one spot, drinking most wine per person, is taken by Portugal, with 52 liters of wine per person and year. 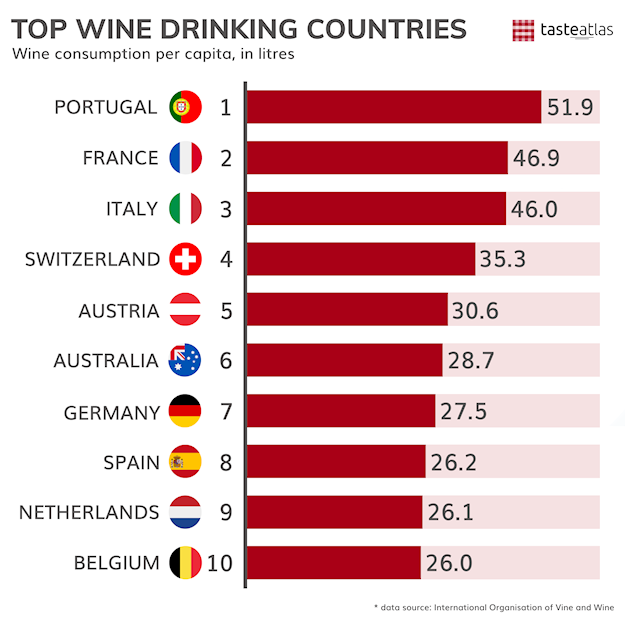 Read more:
Check out 100 most popular alcoholic beverages in the world